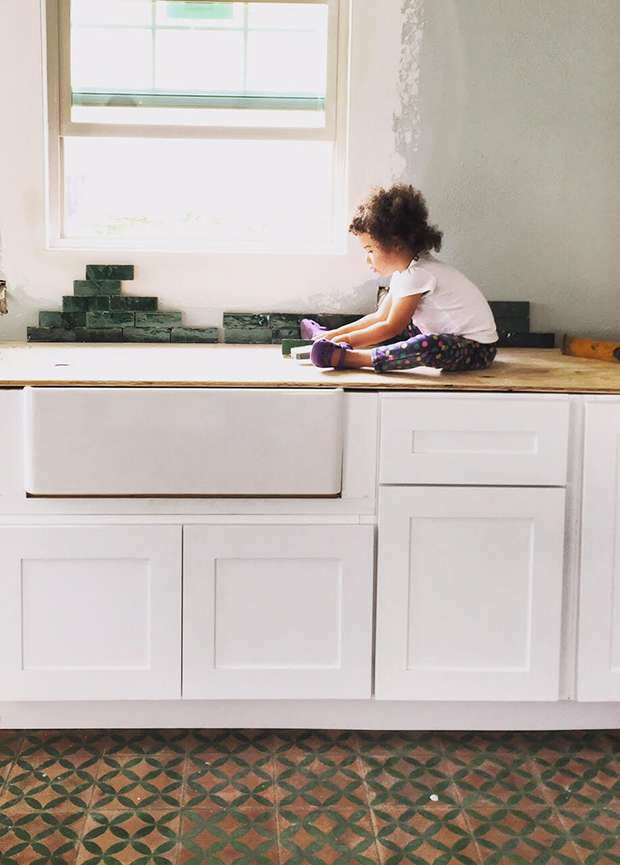 Last time we checked in about the kitchen, we had just chosen our tile from Badia Design. Since then, the floor tile has been installed, so have our prefab cabinets, our farmhouse sink and two new windows have been put in, too. Things are moving along pretty quickly, although, admittedly not quickly enough seeing as how we move in tomorrow–but such is life, yes? I’m actually just taking a much-needed packing break right now to write this post. Dang I have a lot of crap. The movers arrive at 8AM. Yikes. Also today my friends from Lowe’s will be coming to install our countertop–but more on that later. 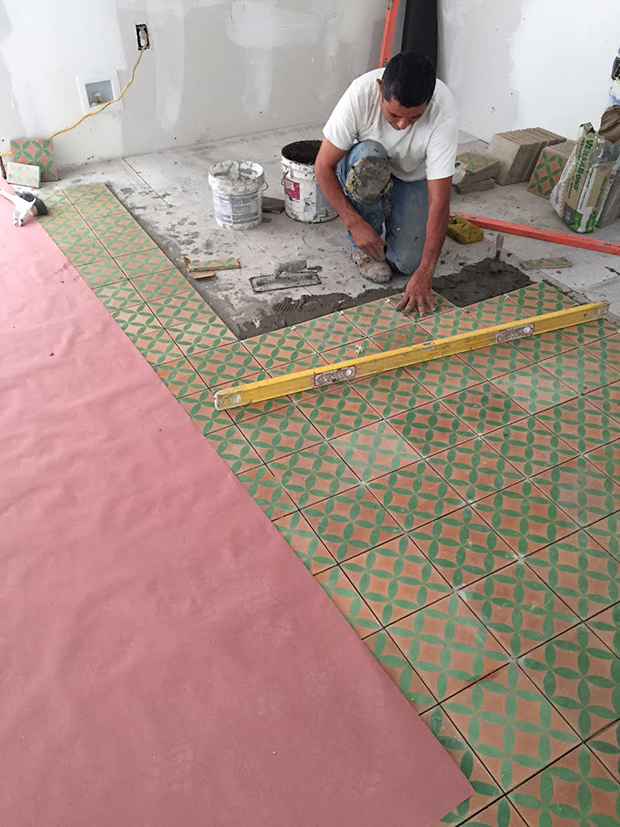 Here are some snaps of the tile installation process. This is the first time I’ve ever had tiled installed before. There are a ton of choices that go into it–grout color was a big one. 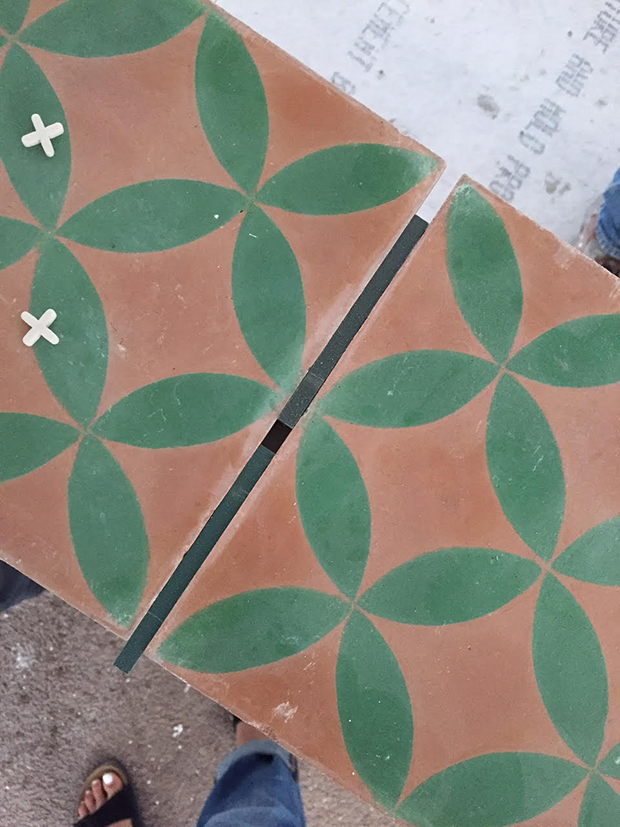 We chose a dark green. Another big decision was how far apart to place the tile–I wanted them as close together as possible. Since the tile in handmade we had to leave a bit of wiggle room incase everything didn’t line up 100% perfectly. 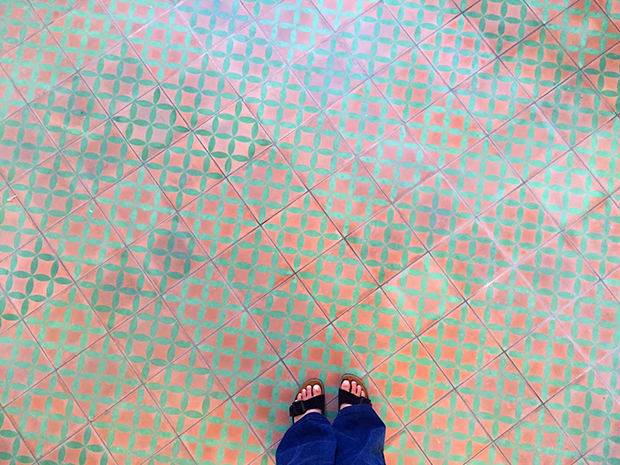 We also had to decide where the tiles would start. AKA which tiles would be cut off so that the entire room would be covered.  I’m really happy with the end result. 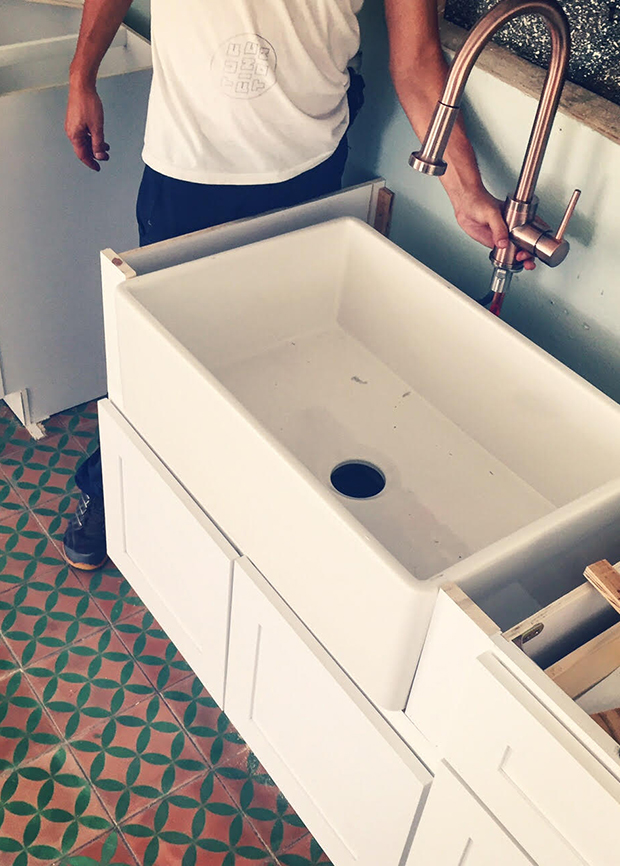 Our cabinets and sink were recently installed as well. We went with prefab shakers for budget reasons. But I’m actually really happy with the way they look and the quality. The farmhouse sink is a honey too. It was a splurge but one of those things (like the tile) I’ve been dreaming about forever. Jason was really cute when we were deciding on whether to get a single basin or double basin…He was like, well if we have another baby we can bathe her in a single basin. Sold.

We sprung for a fancy faucet too. We are doing all copper hardware throughout. We just found some pretty sweet copper cabinet hardware at Eric’s Architectural Salvage that will hopefully be installed in the next few days as well. 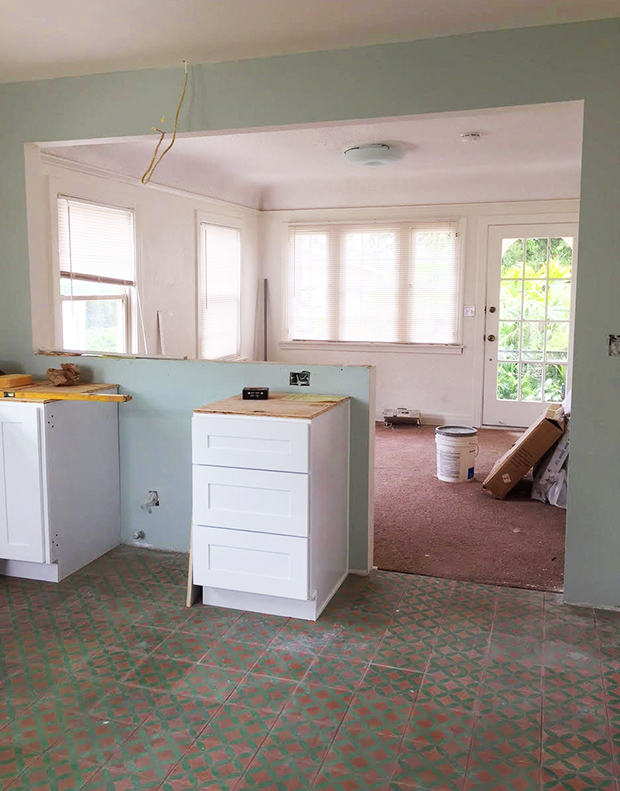 And while everything is running remarkably smoothly thus far, and our contractor and his team have been a dream to work with, there are a lot of lessons I’ve learned along the way that are probably worth sharing–so here goes:

Wall Texture
Apparently, the default position for most painters is to match the paint finish of a new room to the other rooms in the house. This meant that our newly installed walls got a weird (and ugly!) bumpy paint texture that we didn’t want. They have since sanded it away and repainted but it was a good lesson to learn. I should have been really clear about wanting smooth walls, even if it meant the walls in the kitchen were the only smooth walls in the house.

Range Hood
Our oven range is going in that gap between the two cabinets in the above pic. We did a lot of research about downdraft range hoods, that suck the air below the house, so that we wouldn’t have to deal with a range hood hanging over the breakfast bar. Even the prettiest of range-hoods would have been an eye sore in that position. After reading tons of reviews for downdraft ovens (the reviews are pretty horrible) we realized that here in the rental we’ve been living in for five years we have no range hood and no downdraft oven. It didn’t even occur to us that with the way we cook (mostly all vegetarian and rarely, if ever deep frying) we may not need a range hood at all. We got outfitted for it anyway, so we can be up to code–but I don’t think we’re gonna use it. The house is basically all windows. I don’t think ventilation will be an issue.

Slide In Vs. Drop In. Vs. Stand Alone
Having always lived in rentals, I’ve never had to buy an oven before. Once shopping for one, I realized how many options there were that can really change the look of the kitchen. The three main types are slide in, drop in and stand alone, and they all come with their own price-points and benefits–but it’s good to know what’s out there are research the different types before just getting the one that looks the best or has the right number of burners. I’ll share more about what I learned about this once my oven gets installed, but the basic gist is that we wanted a slide-in so that it looks seamless with the countertops and food won’t slip through the cracks on either side of the stove.  :) 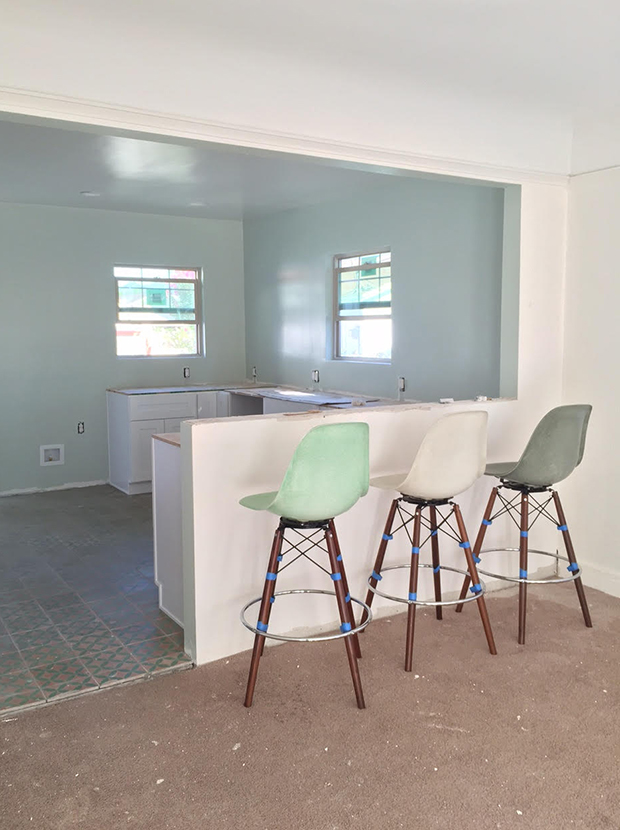 Popcorn Ceiling
We were debating whether to remove the popcorn ceiling. We are really spreading ourselves thin with the remodel and are running low on cash, but we decided to get rid of the popcorn ceiling in the front three rooms of the house because we were afraid if we didn’t do it now, we’d never do it. It made such a dramatic difference and I’m so glad we did it. I’m regretting not having done it in the bedrooms too now–but maybe we’ll get to it when we redo the bathrooms next year, or whenever we have the money.

And that’s where we are. This week we should be making some serious strides. At least I hope so!! We should have the counters, backsplash and open shelving installed. We will bid adieu to this carpet, and say hello to the original hardwood floors nestled safely beneath.

Our stools from Modernica arrived last week too. I put them there just to see how they fit, and, well, it got me pretty excited. There’s a light at the end of the tunnel…

Previous Post: « Saying goodbye to the Jungalow 1.0 and a yard sale!
Next Post: Little Nicki’s Plantastic Picks: 4 plants for the bathroom. »